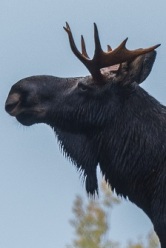 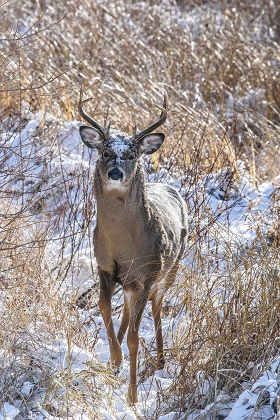 Winter has set in and the forecast is for a cold spell. But first, some (more) snow.

It was cold early to mid-fall in 2019, but then it turned ‘mild’. Not a snow-melt above the freezing mark mild, but few -200 C bone chillers, the last couple of days a minus 32, but no minus forties at all. All in all, a rather pleasant Christmas and New Year holiday season.

The moose and deer seasons are closed and I stop grouse hunting on Dec. 15. For years and years Dec. 15 was when the moose, deer and grouse hunting seasons used to simultaneously close here in the part of northwestern Ontario where Lil and I live. In recent years, there have been some season length extensions to grouse seasons, but I haven’t taken advantage of them. It seems that once the snow comes, the grouse are hard to find and from my perspective, a 3 month hunt for big and small game that ends Dec. 15 is all I want or need. By then it’s time for get ready for the upcoming holiday season and try and be primed to participate in the festivities.

And so here I am in early January at the beginning of a brand new decade. A hundred years ago we’d be entering what came to be known as the roaring 20’s.

But this is a new time and place. We’ll just have to see where it leads.

As usual for me, this is when I reflect on the hunting seasons that just passed. As I previously wrote, I had a wonderful hunt with Neva, our Wachtelhunde hunting dog and companion.

I didn’t go moose hunting as neither Lil nor I even applied for a tag to hunt an adult moose. In the two Wildlife Management Units we like to hunt, there was only 1 tag available in each unit. One of the tags was for a cow, which seemed ridiculous (if there are so few moose that licensed hunters are provided with only 1 tag, why would it be for a cow?) and in the other WMU, we had no idea where there might even be a moose in a place with both access and where there was a reasonable chance of success. So we opted out of applying for a tag, but bought licences to retain priority for future draws. Prior to the season, and then during the season in a WMU where I was deer hunting, I did see moose. 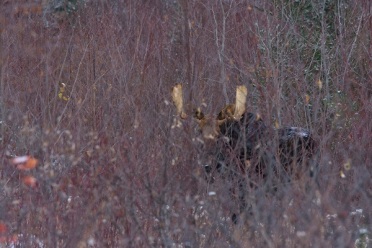 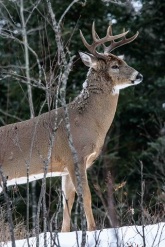 I didn’t shoot a deer, either. I did have opportunities, but did not have a doe tag and the few bucks I saw I opted not to shoot.

There are lots of places where I see game during the fall hunting season where I can’t hunt. Some of the animals are on protected areas and other properties I have no permission to hunt on; sometimes I see animals I don’t have a tag for; and, there are a lot of animals that are on or adjacent to a road. Around here, you can’t shoot down, across, or from the traveled portion of a road and on some roads you can’t even have a loaded firearm until you are well away from the right-of-way. And on many roads, it can be dangerous to come to a stop unless you can pull off, which isn’t always possible. Often, there is simply no space to stop, pull off or park.

I also have to say that shooting wildlife with a camera isn’t easy. Often, it’s harder than with a firearm. For example, shooting ruffed grouse on the fly with a camera is quite the challenge that I haven’t yet mastered and likely never will (although for me, the same is true with a shotgun . . . ). Still, I sometimes score and when I do, it’s a very satisfying feeling.

Similarly, I’m always trying to get good shots of buck deer. Deer are not near as plentiful here as they used to be a few years back, but there’s still some around. The best place to see buck deer though, is in the city. Over the past few decades, deer in northwestern Ontario, like in a lot of villages, towns and cities all across North America, moved in, found suitable housing and are now a fixture in many neighborhoods.

The other thing with the camera is that you can shoot any species at any time with no need for a license or a tag. There’s waterfowl, fur-bearers and basically anything that walks, crawls, slithers, swims or flies can be the subject of a photo shoot. 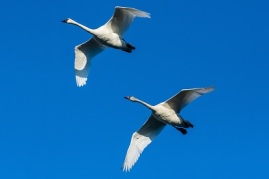 But now that we are into January, there’s not near as much life around. Big game hunting is over as it is for waterfowl and upland game birds. With respect to photo shooting, the majority of birds have left, many of the animals have gone into hibernation and most of the deer have lost their antlers. I still see a few grouse – lately a couple come each evening just before it gets dark to bud in the white birches. A few other odds and sods, but it’s not a wildlife viewing paradise by any stretch.

So the hunting season is a wrap and photo season has transitioned.

Still, it’s a New Year and it’s all good.