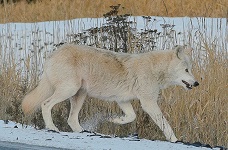 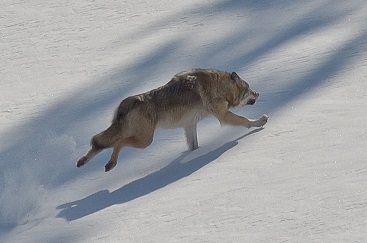 Some of the Kenora area wolves I have seen.

Back in 2014 I wrote on my blog how the local wolves, particularly the big wolves that prey on deer and moose, were still doing well. Locally, meaning within about a 100 km radius from the city of Kenora, the moose population had collapsed and white-tailed deer numbers were plummeting – but there were still a lot of big wolves around. Smaller canids, namely coyotes, were present, but not numerous.

These days, I can report that moose populations have not recovered and deer populations really crashed; there are still some deer around, but very, very few moose.

Surprisingly, a sizable population of big wolves has endured here, but maybe not as many as back in 2014. Coyote and other smaller wolf numbers seem to be up.

With respect to wolves in general, there remains much controversy regarding wolf taxonomy and wolf management. Research on wolves continues to provide interesting information on wolf biology.

Big wolves are widely distributed – they are found across much of North America and Eurasia, as well as India, China and even parts of Africa. There’s general agreement that the majority of these wolves are all one and the same species, the Grey Wolf (Canis lupus). Some claim there are not one but three species of wolf in the world; the Grey Wolf, the Red Wolf (C. rufus) and the Ethiopian Wolf (C. simensis). A few – mostly some Ontario-based biologists and scientists – say the Algonquin Wolf is also a separate species of wolf ( C. lycaon).

In North America, there is also the other ‘wolf’, the Coyote (Canis latrans), which many suggest is not really a wolf. 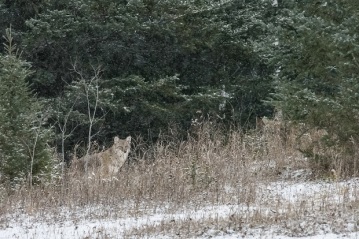 A Coyote – in Alberta

The trouble with taxonomy is that there are no clear rules as to what constitutes a species. It appears that all these wolf species can interbreed and produce viable offspring. So are they all one species with a lot of variety, or  . . . what?  For example, the Red Wolf is in danger of extinction in large part because of hybridization (interbreeding) with coyotes.

The Algonquin Wolf was, until recently, referred to as the Eastern Wolf, a sub-species of Grey Wolf or perhaps a distinct species. However, recognized hybridization with Coyotes and Grey Wolves messed thing up and somehow it became the Algonquin Wolf. Interestingly, on the official Ontario Ministry of Natural Resources and Forestry website on the Algonquin Wolf (https://www.ontario.ca/page/algonquin-wolf), the scientific name provided is Canis sp. Which seems to me to say: ‘We don’t know exactly what it is, but we know one when we see one.’

Anyway, regardless of the taxonomy, the prevailing attitude almost everywhere is definitely pro-wolf protection (the exception may be coyotes). Often, the attitudes and management direction seems to me, to be totally bizarre.

For example, on the USA side of Lake Superior, Grey Wolves have been re-introduced to Isle Royale (at great expense), after apparent inbreeding brought the resident Grey Wolf population down to two. Two wolves couldn’t keep the moose population in check and moose were eating themselves out of house and home.

The resident wolves on Isle Royale came to be there by crossing the ice, like the moose (when early Europeans went to the Isle, they found Caribou; apparently, there were no moose, or wolves).

Natural re-population of wolves from the mainland was thought to be a non-starter because climate change was making the chances of an ice-bridge in the future unlikely. Same with Caribou.

Meanwhile, over on the Canadian side, wolves crossed Lake Superior’s frozen waters a few years ago and pretty much wiped-out the resident Caribou on the Slate Islands.  Then wolves proceeded to do the same on Michipicoten Island – to save the not so long ago introduced Caribou (a species officially classed as Threatened under the provincial and federal legislation), the Ontario government  . . . decided to catch the Caribou and move them to (again, at great expense). . . the Slate Islands.  In other words, save the Caribou (???), but only by doing no harm to the wolves.

The Grey Wolf, by the way, is a species that in Ontario is not at risk under the Endangered Species Act, (they are common and widespread in distribution); although the Algonquin Wolf is listed as ‘Threatened’. By consensus, the wolves around Lake Superior are thought to be Grey Wolves, not Algonquin Wolves.

Back on Isle Royale, ice has made a bridge from the mainland to the Isle a couple of times in the last few years. On at least one occasion, researchers documented wolves from the mainland did cross the ice over to the island, but they didn’t stick around.

It’s supposed to be another colder than average winter in the Great Lakes Region, so chances seem good that in 2020 there will once again be an ice bridge from the mainland to Isle Royale.

Back home in Kenora, I’ve been seeing coyotes (brush wolves?) on our property over the last few months. I have seen tracks of much larger wolves, but haven’t seen one lately. When I was out deer hunting about 50 km from the house the other day, my hunting partner and I came across tracks of a pack of at least three big wolves.

Off property, I have been deer hunting on 8 different days – neither I nor my hunting partners on those days have seen a deer (or a wolf).  But one day we did see a moose!

Recent studies in Minnesota are confirming Grey Wolves can move vast distances and set up a new home range. Hundreds of kilometers of movement does not seem all that unusual, as evidenced by northern Minnesotan wolves re-locating to the Red Lake, Ontario area (about 300 kms, as the crow flies). See https://www.facebook.com/VoyageursWolfProject/ for interesting updates on their findings.

From my perspective, wolf management, or a lack thereof, is symptomatic of the problems facing the wildlife management profession everywhere.

Too much emotion, too little use of scientific principles.