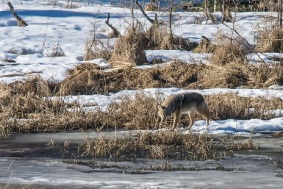 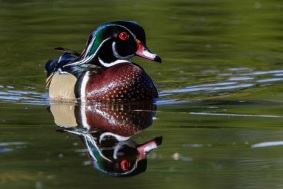 May 7 and the ice is gone – from most lakes. There’s still ice on the big, deep lake trout lakes and one can still see the odd patch of snow/ice in the bush. Last night it was -80 C, so it’s not as if the blossoms are in bloom. Fact is the pussy willows have only just begun to emerge. No green sheen in the forest yet.

At least the pond in front of the house has been ice-free for several days, albeit most mornings there is a bit of ice along the edges. But that quickly melts off and is long gone by the afternoon.

When there was a mix of open water and ice on the pond, the ducks were in active courtship. The hooded mergansers in particular were really going at it. Lots of fighting and displaying and ‘gronking’, which is the sound of their mating call.

There were also wood ducks, green-winged teal, ringnecks, common mergansers and of course mallards. Very early, a pair of Canada geese built their nest on the beaver house and we expect the goslings will be hatching any day now.

I put up a blind to photograph from and for a few days there was a lot of action for me to try and capture. However, things have slowed down considerably and lately it’s mostly just a group of three drake mallards that come by the blind. Maybe things will pick up once the nights get a bit warmer and things start to green up.

In addition to the waterfowl, there’s been a steady stream of other migrants. Of special note was a pair of willets (first I’ve ever seen) and several rusty blackbirds. And the tree swallows are back – all three nest boxes look to be claimed.

Some deer did make it through the winter. In addition to the three that were almost daily visitors for months, there have been of late a couple of others coming to nibble at greenery on the lawn. Yesterday we noticed a large paw print of a bear on the road only a couple of hundred meters from the house. Maybe it’s the big brown one I saw last spring.

Also yesterday, in the morning, we saw from the house a very fluffy, orangy red fox catching some rays. A couple of weeks ago, just when the ice was starting to melt, a coyote – the first we’ve seen on our property –showed up one day, but we haven’t seen it since. Best of all, I haven’t seen a timber wolf for several weeks.

There seems to be good numbers of ruffed grouse as we hear many drumming, not just on our property but pretty much wherever we have been. Neva seems to find one or two to flush on her daily walk, which keeps her happy. I like grouse a lot, so seeing and hearing grouse every day is a good thing.

Lil and I haven’t seen a single moose track anywhere we’ve been. Granted, we’ve not been travelling far and wide, but in years gone by it was common to see moose tracks on our property and here and there on the roads near town. Those days are long gone.

The MNRF released its moose tag quota allocations for the 2019 hunt and, unbelievably, is planning on issuing more cow tags than bull tags across the province as a whole. This despite the fact moose numbers continue to decline and in most WMUs, moose populations are well below their targets. In the WMU Lil and I hunt (06), only 1 tag was issued – for a cow. It seems to me this is complete lunacy, but it’s also what I’ve come to expect from an outfit where I worked for more than 30 years. I’m just glad I don’t work there any more – it’s hard enough admitting it’s where I had a career. I just shake my head.