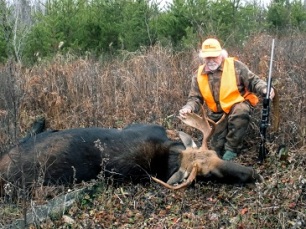 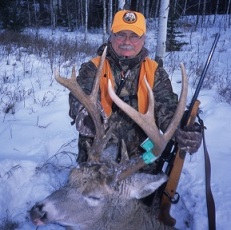 In addition to wolves and coyotes, bears, deer, moose and turkeys have to be tagged in Ontario.

I recently purchased a wolf/coyote tag so I can hunt wolves. Actually, I just need/want the tag to be able to shoot a wolf if it happens to show itself on the frozen pond in front of the house. As I’ve said on a number of occasions on this blog and elsewhere, I don’t hate wolves and appreciate the important role they play in the overall scheme of things. However, there are, right now, lots of wolves around, a holdover from when deer were super-abundant. Deer populations have collapsed, but wolves have hung on.

But with few deer (and virtually zero moose), the local wolves are getting desperate. They broke into a neighbors kennel the other day and attacked a dog; the dog was saved only because the neighbor heard and then saw what was going on and managed to beat the wolf off. Hence the need/want for a wolf tag.

It’s not a wolf licence. Wolves in Ontario fall under the auspices of a small game licence, so to hunt wolves you need a small game licence and a wolf tag. There are some stupid regs associated with this scenario – one can’t hunt wolves with “a rifle with a muzzle energy greater than 400 ft-lbs . . . during the open [firearm] season for a big game species [without] a valid licence for a big game species that a season is open for.” Even if you have a small game licence and a wolf tag. That’s just ridiculous. But, since there is no moose or deer or elk rifle season open where I live right now, it’s not a pressing issue.

Anyway, I had to go down to a licence issuer to buy the tag. It cost me $11.36 and was printed out on a sheet of letter-size bond paper. The tag itself is only a portion of the sheet of paper (less than ¼) and there are instructions where to fold it and cut it out.

As I said, the tag was printed out on standard bond paper.

The Ontario Hunting Regulations Summary says “The term ‘game seals will be replaced by ‘tags’.”

I haven’t asked anyone why the change, but it seems to me it’s pretty hard to claim a piece of paper that can virtually disintegrate if it gets a soaker is a ‘seal’.

Which leads to the question: what is the purpose of a ‘seal/tag’?

Seals have been used by game agencies to ‘tag’ an animal a hunter has the authority to harvest. ‘Seal the deal’, so to speak. A seal was meant to ensure the harvest of a particular species, or type of animal (e.g., buck, doe) was tightly controlled. This is different from how fish are generally managed, where there are simple catch and possession limits (e.g., you can catch x number of walleye every day during the open season, and possess another number. But if you eat, or give to a friend your catch limit, you can go out the next day and do it all again). It’s all about abundance – generally there are lots more fish than there are animals.

Although there are caveats, the simple way to view seals and tags is to understand they are meant to ensure that once one has sealed/tagged an animal, you can’t kill another, unless one has another seal/tag.

In Ontario, and many other jurisdictions, seals have been made from a relatively indestructible material; like plastic, or nylon. Often, they had one side that was ‘sticky’; to seal an animal one had to remove the covering on the sticky side of the seal, attach the seal to the animal (at the kill site), and press the sticky side together. Usually, the time and date of the kill had to be notched into the seal. These two requirements (having a sticky seal that couldn’t be ‘unstuck’ and notching the seal, were designed to keep hunters honest and ensure the seal couldn’t be used again. In addition, seals are/were difficult to copy, so what you got was what you got.

The last few years Ontario has been getting out of having tags ‘stick’, but they were still made out of a mostly non-destructible material, had to be attached to the animal at the kill site, and had a requirement to be notched as to time and date of the kill, again, at the kill site. And they were difficult to copy.

But such seals, even without the sticky (or a wire which also used to be issued that was used to help attach the seal to the downed animal) aren’t cheap, or at least have some cost to them. As such, they’re one place where game agencies, being stretched ever thinner and under constant pressure to trim costs and find ‘efficiencies’, have been focusing their attention of late.

To achieve ‘efficiencies’ – and supposedly to make life more convenient for hunters – Ontario has done away with seals and replaced them with tags. There’s no requirement for tags to be printed on something that’s weather resistant and, except for wolf/coyote tags (I have no idea why there is an exception for these canids), a hunter who is eligible can print off both their licence and associated tags at home.

I’ve heard that there has been advice put out by the Ministry of Natural Resources and Forestry (MNRF) to put tags in something like a zip-lock bag to keep it from being destroyed, but I don’t see such info on the tag I purchased nor do I see anything like that in the hunting summary.

There’s still the requirement to notch the tag at the kill site, but the tag doesn’t have to be attached to the animal if the hunter remains in possession of the animal until it’s brought “to the site of processing and is being processed for long-term storage”. If one isn’t in accompaniment of the animal, or “immediately available to produce the tag for inspection”, the tag has to be attached to the appropriate place on the animal as described by the tag.

For one, requiring the tag to be notched at the kill site before the animal is moved, and not destroying the integrity of the tag, is going to be a challenge in any kind of inclement weather.

It is an offence to make a copy of any licence or tag, but given they can be printed out on paper and it doesn’t state, in either the current regulation summary or on the tag itself (at least it doesn’t on the wolf tag I have ), in plain language that making a copy is illegal, the tag is a weak replacement for a ‘seal’. And a paper tag is very easy to copy.

There is a code on the tag that can be scanned by a QR reader, and apparently it is encrypted for use by Conservation Officers. However, everything I have heard to date suggests the field CO’s don’t have, at least as yet, the ability to detect whether a tag is an original or a duplicate. Hopefully, that will be sorted out before too long . . .

Still, the tag is on paper, which means the QR code can be easily damaged and thus won’t, if damaged, be of much use with respect to enforcement.

Apparently, the switch from a ‘real seal’ to tags created a fair amount of acrimony within the MNRF owing mostly to problems around enforcement and security. I think I can see why.

To a large degree, MNRF and others in the hunting community are counting on hunters to be supportive of the new system and abide by the regulations.

However, as I pointed out in my last post, hunting culture in Ontario, in my opinion, has moved away from being supportive of what the MNRF is up to, and the incidence of blatant disregard for rules and regulation is high.

I hope I’m wrong and the things will go off this year with minimal problems.

I guess we will soon find out.