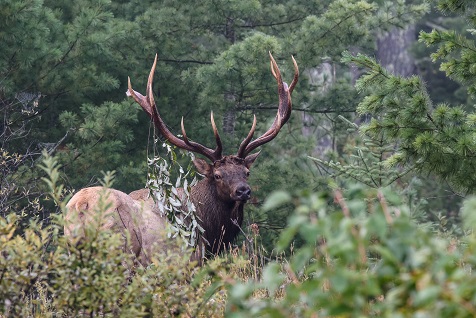 The hunting season, for white-tailed deer and grouse, in my area ended ½ hr after sunset yesterday (correction:grouse season is still open; it now closes at the end of December. But I have never hunted past Dec 15, which is when the season used to close.)

It was a rather uneventful day. I didn’t go hunting and hadn’t been for several days. For the second straight year I didn’t harvest a deer. I did have opportunities; more than last year. I saw at least 4 different bucks. Yearling bucks were the youngest and smallest; the other bucks were at least 2 ½ years old and the largest one might have been 3 ½.

I took a number of ruffed grouse and a few spruce grouse this autumn (plus some pheasants, sharp-tailed grouse and Hungarian partridge in Alberta). I hunted with my dog Neva here and in Alberta, and a bit with Lil and our other dog, Dory (near home). Dory’s front legs have never worked properly so she’s had that handicap all her life. But Neva seems to have brought her joy and Dory now enjoys being able to hunt with us, even if it’s only for a very short time during an outing.

The moose hunt also ended, but my moose hunting this year was restricted to the week I flew into the wilds of Manitoba; zippo on that hunt. I did have a tag for moose hunting in Ontario, but I wasn’t interested in hunting a calf because I don’t believe in calf hunting (not like it’s being done in Ontario); and, I didn’t have an adult tag on my moose license – nor did any of my normal hunting buddies.

The highlight of my hunting season was in early September. Saw a magnificent bull elk on a misty morning. There is no licenced hunt for elk in Northwestern Ontario, but someday there might be. Elk were re-introduced in this area in 2000 and although there have been some setbacks, there are a few herds around that seem to be doing OK. There’s been some encouraging reports of late, so ‘fingers crossed’.

The last few days of the hunting season have been cold and windy; into the minus twenties in Celsius – ‘silly arses’ – degrees. Too cold for me to want to go hunting.

There were not a lot of deer around anyway; most days when I went hunting I didn’t see a single deer. But tracks and dropping and rubs and scrapes showed there were deer scattered about and twice we saw deer along the highway driving to our hunt spot, or coming home after the hunt was done.

I saw almost as much wolf sign as deer sign. Everywhere I went there were fresh wolf tracks. On a few occasions we could hear them howling, sometimes quite close by. On a hill my buddy Deryk and I have hunted for years, there was very little deer sign (none on the hill itself) but we counted at least a dozen piles of wolf crap. More than once we saw wolves.

When it gets cold and snow covers the ground, the ruffed grouse just seem to disappear. I hadn’t been shooting any lately, not just because it’s been cold, but more important, many places now convenient to hunt might be areas where trappers are working; some trap sets could easily be tripped by an inquisitive dog and that would be the end of that. We had been letting Neva hunt grouse on many of our almost daily walks on our property; I just hadn’t been trying to shoot them. I like seeing the grouse and if they stick around, we can continue to ‘hunt’ them all winter, or at least on some nice days when there a few birds out and about.

Now that deer and bird hunting is over, I think it might be time to hunt wolves and get ready to do some ice fishing.

And maybe dream of an elk hunt.