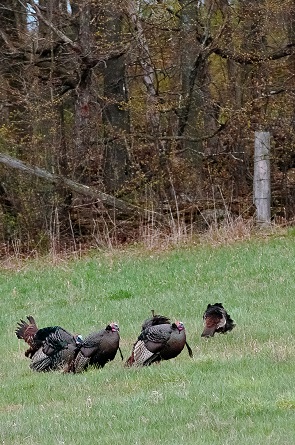 Today I applied for a spring turkey hunting license in Michigan. Not sure how this will pan out, as there is still much to do before the hunt, if I do get to go.

Let’s look at the list: need to get drawn (apparently, the odds are good); need to renew my passport; need to fill out some forms to transport a firearm into the USA; and, I need to see if there are restrictions this year as to whether I can actually bring a turkey back into Canada from the states. Last year, a few friends hunted in the mid-west, were successful, but were not allowed to cross the border back into Canada with their birds. The problem was an outbreak of avian flu in the states – another wildlife health and disease issue. Anyway, it’s something I need to delve into and find out what the score is. No sense spending all that time and effort to travel and hunt and not be allowed to bring back a tasty bird (if I’m fortunate enough to harvest one!). On the other hand, I’ll have a chance to meet up with some old friends I haven’t seen in a while.

If I can’t harvest a bird that I can bring home from Michigan, I can still hunt in Ontario. Maybe I can do both, as the area I’m looking at going in Michigan isn’t far from Sault Ste. Marie, where there’s a healthy wild turkey population to the east, and a hunt on nearby St. Joseph’s Island. I’ll have to see how events unfold . . .

I really enjoy turkey hunting, but I find it somewhat distressing that a disease issue is once again a factor as to whether I can harvest, transport and consume my (potential) catch.

On my last post, I discussed chronic wasting disease and the fact there was a little bit of good news on that front. Not much, but a little. Despite the bad news about avian flu, most of the wild turkey story is good news. Growing up, there were no turkeys in Ontario; they were extirpated in the 1800’s. Today, turkey numbers in the province (progeny of wild birds captured from neighboring jurisdictions and then live released) are closing in on a 100,000.

There could be more. In northwestern Ontario, I think wild turkeys would do well in the agricultural areas around Fort Frances and Rainy River. After all, there are wild turkeys in parts of adjacent Manitoba, where the weather is similar, if not a bit more harsh. The problem is the government in Ontario, or at least some individuals, believe that because northwestern Ontario is outside the known, historical range of turkey, wild turkeys don’t belong. It’s a consideration which can make sense (one doesn’t want introductions of wildlife made willy nilly), but it’s not as if wild turkeys are exotic to North America.

What seems to have gotten the short shrift in this line of thinking is the fact that the agricultural lands of northwestern Ontario today bear little resemblance to what the landscape – and its associated faunal assemblage – looked like prior to European colonization. And outside of some sort of apocalyptic, catastrophic event(s), there’s no going back to the way it was. That’s nothing but a pipe dream, adhered to only by a small and radical fringe of extreme environmentalists.

However, it is what it is and with no close by Ontario turkeys, turkey hunting for me, at least for the foreseeable future, means going on a considerable hike.

All in all, it’s not necessarily a bad thing. It just could be better.