Lately, while driving around, I’ve seen lots of turtles digging out holes on the shoulders of the roads to lay their eggs. Most of them are painted turtles, but there’s also a fair number of large snapping turtles. These are the only two species found in this area.

People must be looking out for them, I’m happy to say, as I haven’t seen very much in the way of road kill. Some years there is a lot of turtle carnage on our local roads. But it’s still early in the year. Turtle egg-laying will last another month.

Painted turtles are smaller and seem to be more common, but I think the snapper biomass is substantial. Some of these turtles are huge; easily over 30 cm across their carapace and weighing over 6 kg.  Snapping turtles, like many turtle and tortoises, are long-lived – it’s believed their life-span is well over a hundred years. As a group, turtles haven’t changed much over the past 200 million years, so one has to suspect they are reasonably well designed and suited to their lifestyle. They certainly look prehistoric.

Not surprisingly, there’s not a lot an adult snapping turtle has to fear – outside of humans and their vehicles. Some people like to eat snapping turtles (painted turtles can’t be harvested) as they supposedly make a good soup. I’ve not tried it, but have to think that whatever the taste, large snapping turtles likely have high concentrations of elements and toxins that can’t be good for you. That’s what happens when you live a long time.

Interestingly, despite the fact snapping turtles have been listed as a ‘special concern’ species under Ontario’s Endangered Species Act,. 2007, hunting them is allowed. It’s a kind of a weird situation; the regulation on harvest and possession are listed in the hunting regulations summary, but to harvest a turtle (they are in a category called ‘game amphibians and reptiles’) you need to have a valid sport or conservation fishing license. Both residents and non-residents of Ontario (most of the snapping turtle harvest in this area has been by Americans) can harvest turtles. The season is open all year – with a daily bag limit of 2 and a possession limit of 5. If you harvest a snapping turtle one must complete and submit a mandatory Ministry of Natural Resources and Forestry (OMNRF) questionnaire (both online and printed versions are available). But like all mandatory hunting reports the OMNRF requires one to fill, it’s mandatory in name only. There has never been a charge laid with respect to failing to do any mandatory report, be that for bear, wild turkey, wolf or snapping turtle. So at least at this point in time, it’s a useless and toothless regulation.

There’s a large snapping turtle in the beaver pond in front of our house and it’s been there for many years. Snappers are scavengers and hunters and will eat just about anything they can, including frogs, snakes, goslings and ducklings. Lil rescued a duckling from it’s jaws once a few years ago, but I imagine it’s got a few we are unaware of. Maybe it’s one of the reasons all the geese and ducks left the pond this year shortly after the young fledged.

Sometimes, if it’s a cold year, the eggs a snapper lay won’t hatch that year, but might the year following – if the nest isn’t found by skunks, raccoons, crows, ravens, mink, marten or otter. Although the turtles cover the hole with sand and gravel, I suspect the scent trail gives it away. Or the crows and ravens, which spy on everything, simply wait for the turtle to leave before helping themselves to a meal of fresh eggs. Lil over-wintered a cache of eggs one year that someone stumbled across while doing some construction work, and had good success in getting them to hatch out. Unlike adults, young turtles are preyed on heavily by a host of meat-eating birds and animals.

Female snappers can hold sperm from males they’ve mated with for several seasons, “using it  as necessary”.

Snappers got their name because they snap – unlike many turtles, they are too large too hide in their shell, so instead they use their might to hiss and snap at animals they perceive to be a threat. They don’t have teeth, but have a powerful beak, and one doesn’t want to get bitten.

I like turtles, even the somewhat hideous and kind of scary snappers.  With a bit of luck, turtles might be around for another 200 million years. They’ll probably out last us. 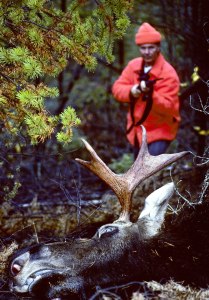 One of the main reasons I eventually became a hunting dog owner was to ensure I’d maximize my chances of finding downed and wounded game. Particularly, in my case, ducks. Not being able to retrieve ducks I’d knocked down just made me ill, and I vowed it was either stop duck hunting, or get a dog. I got a dog.

These days I don’t hunt ducks much; I spend more time in pursuit of upland game birds like grouse, pheasants and partridge, and of course I still hunt deer and other big game, with a passion.

My dogs are Wachtelhundes, a German breed that are, like many of the German hunting dogs, used for tracking, trailing, flushing and retrieving just about anything one wants to train them to do.

My friend Gary, who has run a hunting lodge not far from where I live, depends on his Wachtelhundes for ducks and upland birds, but also to find big game, including bears and wolves, his guests come to hunt. Gary instructs his guests not to try and chase down any game that runs-off’ after they shoot; rather, they are instructed to wait until Gary’s return and he’ll track down the animal with his dog. Almost all his hunters hunt from high stands, a practice they are very familiar with as most of his guests come from Europe, where this is the common hunting methodology used.

I haven’t used my dogs for tracking downed moose or deer I’ve shot at because, with one notable exception, every big game animal I’ve shot has pretty much dropped dead in its tracks. A few went a short distance, but were easily retrieved. The one exception was a large buck I shot and hit, but was unable to retrieve. I didn’t use my dog – Brill –  to help find it because I had never trained her to do blood tracking, and because there was not a lot of blood, I figured, in a distraught frame of mind, the dog would never find the deer. I still think about that deer, and know I made at least one big mistake by not letting the dog have a chance to track it. She had a much better nose than mine, and to think I could be a better tracker than her was plain stupidity on my part. I also believe it was a mistake not to have trained her to do blood trailing in the first place. It may not have been necessary for her, but it would have been good training for me, at the least. Even though this event occurred several years ago, it still bothers me.

And it should. Making every possible effort to retrieve wounded game should be a priority for all hunters. Striving to make as clean a kill as possible should be the top priority, but mistakes can and do happen. It’s hunting – conditions to dispatch quarry are usually something much less than perfect.

Not long ago I heard from a former colleague of mine about an organization that’s dedicated to using leashed dogs trained specifically to track down wounded big game. They call themselves the Big Game Blood Trackers [Ontario] (BGBTO) and they’re having an introductory seminar and field workshop in the Peterborough area of Ontario (a couple of hours east of Toronto) this July (Saturday July 18 & Sunday July 19),  at the Ontario Federation of Anglers and Hunters (OFAH) Hunting & Fishing Heritage Centre. It’s a good place to hold this type of event.

They’ve lined up a number of knowledgeable speakers from the USA and Canada on topics such as the history of using leashed dogs in Europe and North America to track wounded game, how to select a good tracking dog (it doesn’t rely any any particular breed) and practical dog training, with a number of in-the-field examples of dogs at work.

If it was closer, I’d be attending. Too bad it’s a two day drive for me. But if you are interested, and within range, I’d strongly recommend one should at the least think about attending and registering for what promises to be an enlightening and entertaining weekend. A lunch and evening BBQ is part of the package, so it sounds like a good time. Hunters have had a long and successful relationship with dogs, and I’m thinking this is the kind of event that should help that tradition continue.

For more information or to register, check out their website at www.biggamesearchon.com, or contact Laurel at  705 277-9183;  manverspack@nexicom.net.