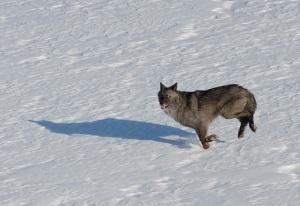 On Easter Sunday we had a big gathering at our house. Two guests reported seeing a large timber wolf on the road about 2 km from the house. Clint tried to get a photo on his phone, but the animal slinked into the woods before he could get a snap. It didn’t appear to be too afraid. I’m sure it was one of the two that I’ve been seeing tracks of near the house all winter.

The next day, I went ice-fishing with my buddy Deryk, and we spotted two wolves crossing the ice at a spot about 500 m down the lake from where we were, and where we had seen a deer cross several days earlier. One rolled around on the ice for quite a while near some old ice-fishing holes, likely in some fish guts. Soon after, a trapper and his son came out from their cabin and told us they had seen a deer cross the ice, followed by a wolf. It wasn’t clear whether the two wolves Deryk and I saw were different wolves. While we were talking, a wolf came out of the woods, again at the same spot, and crossed back to where we had seen the two other wolves come from. Later, after the trappers had left, another wolf, or the same one, crossed back on the ice.

There are not many deer in the area where we were fishing so I imagine once the wolves get on one, they will be relentless in their pursuit and simply run it down, even if it takes a day or more. As I said in an earlier post, it sure looks to me as if the wolves are cleaning up the remaining deer in these low density deer areas. Some places where the deer are more numerous, I think the deer have a better chance of survival, as they can ‘lose’ themselves from the wolves in the mix of tracks and scent.

Although the winter is almost over, as there is not much snow cover left, I think the wolves had a good time of it and that’s not good news for deer and deer hunters. Personally, I think deer numbers in much of northwestern Ontario outside the agricultural areas around Fort Frances, will continue their downward trend until the next spruce budworm epidemic , which is scheduled to begin sometime around the year 2020. Spruce budworm kills off balsam forests, and as the trees begin to die they get colonized by the arboreal lichen Usnea, commonly called Old Man’s Beard. Lichen laden forests provide abundant and nutritious winter food for deer, and the evidence suggests deer numbers surge in the aftermath of budworm epidemics. But once the lichens are gone, as they are now, deer don’t have access to the quantity or quality of food to get them through winter.

Yesterday I went fishing (yes, again; this time for crappies) and on the drive to Gary’s, there were tracks of 4 or 5 wolves in the fresh snow on the road. Gary told me 7 wolves had been taken this winter from near his place, but obviously there were still many wolves around.

Beavers have just started coming out, but most of the small ponds are still frozen, so it will be a few more days before the beavers can emerge. That will give the wolves an alternate prey (no moose at all in the area; none!), perhaps providing some relief for the deer. Not great for beavers, though.

Fishing, by the way, has been great. Plenty of fresh perch, walleye and crappie in the fridge.