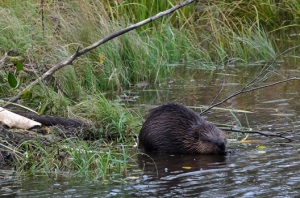 After an absence of a few years, a pair of beavers set up shop in the wetland in front of our house. In 1995, when we built the house, we had the backhoe operator – after installing the ground-source heat loop (necessary for our geo-thermal furnace) dig out a small pond. It didn’t fill in for over a year, until my spouse Lil introduced her orphaned and in-our-home raised beaver kit to it. That got the pond rocking.

I remember one evening a few years later doing the BBQ on the deck and listening to what had become the omnipresent sound of beavers chewing. Scanning the waters of the now greatly enlarged pond, I counted 13 beavers munching away. At that point, I knew the days of the beaver were limited. They were rapidly eating themselves out of house and home. A few years later, the beavers were gone, as were the poplars that used to ring most of the pond.

Even after the beavers left, one or two would always show up sometime during the summer, staying a day or sometimes longer. But they didn’t stay long, and as time passed, the pond shrank, mainly because no one was maintaining the dam.

When the pond was new, it had a lot of grass and sedge, but plant diversity overall was low. As it aged, wetland plants like cattail and duck potato began to flourish. The beavers in the pond this summer ate some alder and a few regenerating young poplar, but really slurped up the duck potato and other types of aquatic plants. So even though there isn’t the poplars there used to be, I think the changes to the plant community will let the beavers stay for at least a few years.

At least I’m hoping. We’ll see how much they chow down with what I expect to be a growing family.

Lil and I really like the beavers and their pond. Both provide hours of entertainment. Geese nest on the pond most years, and some years (like last year) mallards also have a brood or two. Ring-necks and hooded mergansers have also successfully reared young on the pond over the years, as have rails, kingbirds and many other passerines. Muskrats make the pond their home, and we occasionally see mink and otter there too. One afternoon, a pair of sandhill cranes fed on its edge, and over time, we’ve seen numerous other birds and animals using the pond. The deer make especially good use of the pond, and can often be seen in the summer in the water, up to their neck, eating rotting, smelly aquatic plants.

And lets not forget the turtles and frogs. In the spring, the frogs sing so loudly some evenings we have to have the patio door closed or we can’t talk to each other or hear the TV (which, at least as far as the TV is concerned, isn’t necessarily bad).

So I hope the beavers are doing OK in their dark little house. It sure looks cold out there.