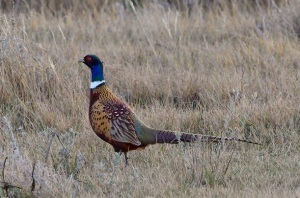 I just returned from a trip to Alberta; did, in no particular order, a bit of hunting, photography, dog training and visiting. It was a good time.

It had been a wet year on the Canadian prairies.There was more water lying around than I’ve seen in the 30+ years I’ve headed west on a regular basis. My destination is south-eastern Alberta, an area known as the Palliser Triangle, an arid piece of the province dominated by cattle ranches with some grain growing. Cattle need a lot of land per animal out there, and in places the ground is literally carpeted with prickly pear cactus. It was so wet this year that the grasses had successfully chocked out some of the cactus, the first time I’d notice that type of vegetative interaction occur.

So, in a relative sense, it was lush. There was lots of cover and the birds and animals were able to keep hidden much more than usual. Still, I saw antelope, mule deer, white-tailed deer, moose (it’s strange to see moose in cactus country), coyotes (lots), pheasants, sharp-tailed grouse, gray or Hungarian partridge, a variety of ducks and geese, hundreds of magpies, a shrike and several other small birds and mammals.

Pheasants – always at the top of the list when bird hunting in Alberta – appeared to be up from our previous hunt two years ago, but weren’t at the levels we encountered a few years back.  As a group, we managed to harvest a few, but I only shot one. I missed a couple and the others I saw while driving for photos or looking after Neva on a lead (so I had no gun). Neva the Diva didn’t have much trouble getting on pheasants and next time I should be able to spend more time hunting and less time training. It’s a lot of fun to hunt upland with dogs and they are almost a necessity for retrieval of downed birds that can be wounded or just plain hard to find in thick cover.

The pheasants on our hunting grounds are wild birds (although pheasants are not native to North America). In Ontario and even in parts of Alberta, the vast majority of pheasants are birds that were raised in captivity and released for the specific purpose of being hunted. I like that they were wild where I go. They are smart and wily, and after a few days of hunting very difficult to get close enough for a shot, with or without the aid of dogs. And it’s not like they are everywhere – pheasants prefer a mix of agricultural crops and natural cover, so once one is away from the river bottoms, there aren’t many pheasants. Hunting pressure is concentrated during the first week of the season (which is a month and a half long) and then trails off fairly dramatically.

Over the next while, I’ll provide updates on my impression of the population status of the other game species we encountered, as well as a few other observations and anecdotes.