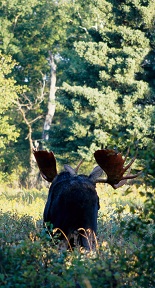 Lil and I didn’t get an adult moose tag this year – too bad for us. Tag numbers were substantially reduced in many Ontario WMU’s, including the WMU Lil and I hunt. No one feels sorry for us, though, as we bagged a nice bull last year. Still, we’ll miss the hunt.

I did write a story for Ontario Out of Doors magazine they called ‘Distress Call’, which was basically an article on what’s happening to Ontario’s moose herds. In a nutshell, they’ve declined steadily for about 10 years, and at least in the near future, prospects for a turnaround appear to be slim.

As usually happens, the article didn’t get printed as I wrote it. For whatever reason – space, editors/publisher concerns – two items I had hoped to be included didn’t make it to print.

First, I have issues with the archery hunt, which in recent years has been becoming more popular. In some WMU’s, there are more archery tags available than gun tags; here’s what I said:

Another problem might be the growing popularity of the bow hunt. Noted ungulate biologist Dr. Tony Bubenik, said it was essential to protect prime bulls, as they do the majority of the breeding. With too few prime bulls, breeding is left to younger bulls (teenagers) that are not good suitors. As the archery hunt occurs during the rut, prime bulls are being harvested before they have had a chance to breed.

The 2nd item that didn’t see the light of day had to do with access. Again, here’s what I had to say about this:

Moose are not everywhere; more likely they are ‘over there.’ Wherever they are, you will need to get there, and that means some form of access.

In Alaska, the hunting access issue has focused on airplanes, because there are so few roads. In Ontario, airplane moose hunting used to be a concern.

Not anymore. Moose hunting in the Trillium province is mostly about trucks, trailers, ATV’s and RV’s. All rely on roads, and the northern, core moose range is full of roads.

Anything to do with roads is a big deal and there are many factors that determine which roads get built and maintained. Moose are only a part of the equation.  Problems arise when restrictions on roads used by licenced moose hunters are proposed as solutions to moose management.

Almost everywhere access controls have been used, be it tearing up roads and culverts and making them impassable, or simply closing a road network to moose hunters using signs and gates, there’s been strong and vocal opposition. It’s extremely difficult to get agreement on access control restrictions because that means possible infringements on legislated rights and privileges, including Aboriginal Rights.

With the decline of the forest products industry, it’s likely there will be less access to the forest in the future than there is today. Old roads are not being maintained, are washing out and are being ‘decommissioned’ at a rate faster than new ones are being built.

The good news is that roads into moose country continue to be built and maintained. But questions on access control remain.

There is no one reason why moose herds have declined in Ontario, and elsewhere for that matter (e.g., Minnesota and Manitoba). However, early season archery hunting and access issues are certainly – at least in my mind – part of the mix, and need to be discussed if solutions to the problem are to be seriously addressed.

I was working in our small cabin in our field the other day, cleaning up and making it somewhat inhabitable, at least OK for use as a comfortable blind for taking photos. Lil and the dogs came by for a visit, took a mouse I’d trapped, and left to go back to the house. I heard some yelling and barking, but didn’t think much about it – they are dogs, and they can bark a lot.

But I heard my name being called so I went outside. Lil was a bit upset and told me that when she had left the cabin and started down the road to the house, she saw a deer and then there was a wolf right there, on the road, maybe 40 m away. Dory, our somewhat handicapped dog (both her front legs are compromised), took off after it, but luckily not for long and the wolf, thankfully, disappeared. Lil thought it was a young wolf, as it didn’t look overly large, and appeared somewhat ‘lanky’. It was dark brown in colour.

That was Sunday, Sept. 14. On Monday, the grouse season opened, so Lil and I, plus our dogs Neva and Dory, went for a late morning, early afternoon hunt. We did a couple of walks on old logging trails where I shot three ruffed grouse while Lil handled Neva (still on the leash). Both dogs retrieved and flushed birds and a great time was had by all.

On the drive home, we saw another wolf, about 10 km from home. This one was large and also appeared to be dark brown in colour.

Today (Sept. 20) I went with my friend Murray to pick-up three critter cams that are part of our attempt to monitor our re-introduced elk herd. We didn’t see any elk or moose, but we saw one buck white-tail and – another wolf. This one was medium-sized and sported the timber wolf’s typical grey coat.

A couple of weeks ago, I was interviewed on CBC Radio as to the status of deer in northwestern Ontario, and during that interview I mentioned that deer numbers seem to have tanked due to the severity of the the previous two winters, but wolf numbers were still high. They had plenty to eat last winter, I said, but pickings are now slim, and it’s likely the wolves will continue to chow down on the remaining deer until they literally run out of them (deer). It’s the classic predator/prey lag effect, and although I was speculating for the most part, seeing those wolves over the past week (and not many deer) certainly would seem to back up what I said on the radio.

One more thing. A neighbor helping me re-do my driveway over the last couple of days told me he saw three wolves in a pack last week crossing the road about 5 km east of the house.

There’s certainly no shortage of wolves in this neck of the woods, at least for now.

Sept. 10 is opening day of duck season, so come dawn Neva and I were in the marsh. It was her first hunt, so I was wrestling with anxiety. Lil and I haven’t been letting her off her lead much, as we don’t want her running off, maybe getting lost, or maybe getting eaten by wolves. With puppies, you never know what to expect.

While the duck population in North America (and especially in the prairies) is said to be at a record high, there weren’t many ducks where Neva and I were. Sometimes the place is swarming with ducks and geese, but not this year. Very high water levels resulted in a no-show with respect to the wild rice crop, and that might be a factor. Oddly enough, dry years are better as far as duck hunting goes in northwestern Ontario. Not only does it make for a better wild rice crop (wild rice does best when water levels drop during the summer, just a part of their biological make-up), I’ve heard that when it’s dry on the prairies and ducks can’t find water, many move into the forest fringe to breed. We’re only a a hundred klicks from the prairies, so we can catch that spill-over when it happens.This year the prairies have been having a real soaker, as has this part of Ontario, so if the drought theory is sound, it’s little wonder there weren’t many ducks around this morning.

Anyway, whatever the reason, there weren’t a lot of ducks. I shot one mallard out of a flock of three. Missed a teal and a hoodie. Saw a handful of other ducks and a couple of geese. There were also quite a few grebes around our blind.

Neva didn’t cause any trouble, although she wasn’t quite sure what the heck we were doing and then didn’t get to retrieve the one duck I connected with. We were occupied doing something when the mallards came by – I was just lucky I saw them at the last moment and managed to up and fire, hitting one with my second shot. Neva, I suspect, was clued out as to why I was shooting, didn’t see the ducks, and didn’t see or hear the splash of my kill. I can’t blame her, because I was responsible for distracting her. She was also sitting in tall grass, so may not have been able to see the birds the way them came in, regardless.

We tried, but I couldn’t convince her to go for a long swim for no apparent reason; only me telling her to fetch! I didn’t push it. After we picked up the decoys from the canoe, I paddled us over to the floating mallard, and pointed it out to Neva, who, sitting in the canoe in front of me, promptly reached over with her snout, snatched up the duck and gave it to me all the while getting praised for being a ‘good girl’. Did that change her attitude!

All in all, it was good to be out and I have to say that Neva’s first hunt was a success. Plus, it brought back pleasant memories of past hunts with Brill and Heidi. A fine morning.