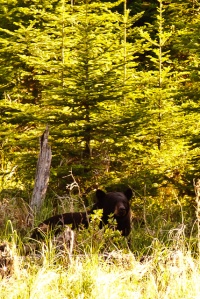 A quick update of recent observations:

There has been a lot of bear activity around the house over the past few weeks. Today the sow with her two last year cubs were feeding on the far side of pond. I doubt those are the bears that caught and killed the young fawn the other day. Maybe he’s the bear in the photograph – he’s big and and even though the photo is a few years old, he might still be around.

Living with bears is something you have to do if you live in the woods around here, but I have to admit I’d like if the bear population was lower.

There’s been a doe deer moping around the house, and we suspect she’s the deer that lost her fawn to a bear. We haven’t seen another fawn here; there might not be another.

Last night Lil heard a mallard and suspected it was a hen moving a newly hatched clutch. A few minutes later I saw the hen on the pond, 8-10 ducklings in tow. It’s the first hatching of ducks on the pond in a few years.

The mosquitoes are the worst I’ve seen in the 20 years we’ve been out here. It’s the weather. But we did hear a whip-poor-will the other night. They must like all the insects.

A touch of frost last night. Some of last years dead grass that got a mowing had ice crystals this morning. The thermometer said it was +2 C.

And it’s the middle of June.