The Ontario Ministry of Natural Resources (MNR) released the moose tag quotas for provincial, resident moose hunters late last week for the 2014 fall hunt. The numbers weren’t good, as was widely rumored. For resident gun hunters, there will be 5,970 bull tags and 4,685 cow tags available; resident archery hunters will have 925 bull tags and 1, 546 cow tags. The tourist industry will get a bit more than 10% of the tags residents have. To put this in some context, we need to go back to 2007, the year MNR announced “a broad review of Ontario’s moose management program to ensure that the program continues to address factors affecting moose populations and is also responsive to the needs of Ontarians.”

That program review is still on-going, but with the exception of a lot of talking, meeting and writing of reports and documents, about the only real change that’s occurred has been clamping down – somewhat – on the ability of hunters to transfer tags from one hunter to another. Oh, yes, and the continual reduction of the number of moose tags available. For the 2007 hunt, there were 9,718 resident bull tags and 3,398 cow tags for gun hunters; archers had access to 1,043 bull tags and 1,374 cow tags. Again, the tourism industry got a bit over 10% of what was allocated to residents.

So in 7 years, the number of adult moose tags available to Ontario resident gun hunters has declined by almost 19%; for archers the decline is only about 2%. However, In both cases, the reduction is far greater with respect to bull tags, which is what the majority of moose hunters want.

A reduction in tag numbers is usually a response to declining populations, while a shift in tags by sex is usually a response to sex ratios in the population. It seems strange that there are more cow tags available in 2014 than in 2007, especially if moose populations are generally in decline, which is true in the majority of the wildlife management units where moose hunting occurs (see my previous post “Missing Moose”).

Unfortunately, the MNR has to date not released the results of moose surveys done earlier this year. When those results are available, I’ll provide a further take on what seems to be going on, including actual moose harvest data (as moose tags have declined, so has the harvest of moose – I don’t know how many moose were harvested in 2013, but in 2012 is was around 7,000, which includes the tourist industry harvest and calf harvest. Note that for the most part, calf harvest is not limited by tags; see http://www.oodmag.com/hunting/big-game/hunt-calf-moose/ for further info).

In the interim, I’d have to say the ‘moose program review’ has not been a resounding success, at least as far as moose hunters are concerned.

We just returned from a trip to Wisconsin, where we picked up a new dog. It’s a Wachtel, of course (see my last post). Her name is Neva and she’s a real cutie, like almost all puppies are.

There were a lot of dead deer strewn along the highway (such carnage!), many of which were just emerging from under the snow. I’d say we saw about the same number of live deer as dead ones. Many of the live ones looked to be in sad shape.

We also saw turkeys, a few raptors (especially harriers), one dead possum and a few other mangled bodies that were hard to identify. Lots of geese about and a fair number of ducks. Other wildlife sightings included a bear, a cottontail, gray squirrels, cardinals, mourning doves and an assortment of common birds such as red-winged blackbirds and common grackles.

One field was covered with a large flock of sandhill cranes. Apparently, Wisconsin has been considering a hunt for sandhills, but there is opposition to it, despite the fact that populations are robust and growing rapidly. Some jurisdictions – the Canadian provinces of Manitoba and Saskatchewan, for example – have a hunt for sandhills, but others, like Wisconsin and Ontario, don’t. In Wisconsin, opponents are concerned hunters might shoot endangered whooping cranes if sandhill hunting was authorized. Seems a bit of a stretch to me.

I’ve never hunted sandhills and have to admit I have no real hankering to do so. Apparently, they taste good, as they eat mostly roots, bulbs, grains and corn, which they are said to be particularly fond of. As one would suspect from a bird with a long, dagger-like bill, they also catch, kill and eat the likes of mice, frogs, snakes and such, but “not in sufficient numbers to make it’s flesh ‘strong'”. Their bill is deadly, and sandhills are well know for their ability to badly injure hunting dogs sent in to retrieve wounded birds. Another reason for me to admire them, but not hunt them.

It’s good to see their populations thriving. For a while, it seemed they might be the only crane left in North America, as the extinction of their close cousin the whooping crane was once believed to be imminent. Fortunately, whoopers have hung on, and while their total population is only a few hundred individuals, that’s a lot better than when they were down to only 19 or 17 birds.

I’ve yet to see a whooper. Maybe someday.

The use of dogs, close relatives to wild wolves, to aid human hunters remains controversial. Of course, human hunters are themselves a controversy. I can understand why many don’t like hunting or hunters, but I’m proud to be a hunter and I sometimes hunt with dogs.

Dog breeding, hunting dogs included, are like with many domestic animals, in that they are part of a huge industry regulating and monitoring who breeds with whom. With respect to agriculture, the concern is often one based on human health – despite the fact there are millions of cattle in North America, rules and regulations breeders have to follow ensures investigators can track meat products on the shelf back to the processing plant, feedlot and farm those cows came from. Dog breeding is designed mostly to maintain or change particular breeds and breed characteristics. If anything, the dog pedigree business is even more in-depth than than those kept by the agri-business, with records that can date back many, many generations.

Depending on species and then breed, there are dozens and dozens of pedigree and breeding organizations. These organizational bodies are usually independent, self-regulated institutions, but increasingly they have to follow federal rules and regulations to remain within the laws of the land. I heard that there are changes in the air regarding the role of the Canadian government and who does what in the world or breeding and record keeping and ensuring everyone plays by the rules. Such changes may or may not have an impact on the breed of dog I know, but if it does, it will be minimal.

That’s because I own and hunt with a dog whose breeding until recently was authorized only by the parent club in Germany. the VDW (German Wachtelhund Club). To breed this dog and be able to provide papers on the offspring, one pretty much had to spend a lot of time in Germany to pass the required performance hunt and measurement tests. So obviously, the breed was pretty much restricted to the European Continent, even though the VDW was established in 1903. However, after some really hard work, that’s not over yet, the Germans have recognized a US based organization that calls itself the DWNA (Deutscher Wachtelhund North America, Inc.). Based in Wisconsin, the DWNA has been OK’d by the VDW, although there are still on-going discussions regarding use of appropriate species of hunted game during field trials (the species and terrain hunted differs considerably between Europe and North America).

Anyway, my dog is a Wachtelhund. As in ‘Walk tell hund’, or simply Wachtel. If you want to read about how I got involved in what amounts to a very exotic breed (not something I ever imagined doing), you can go to the following site. http://www.wachtelhund.org/WachtelRanta.php?pagerCurrent=1

It’s not a site run by the DWNA (there’s a long story there), but it is the original story I wrote about the Wachtels many years ago.

Anyway, that’s me and Brill in the photo. 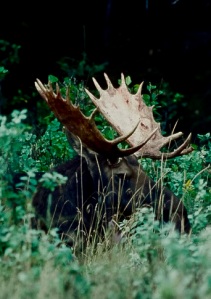 Earlier this winter, the Ontario Ministry of Natural Resources (MNR) flew an almost unprecedented number of moose surveys. Although MNR has yet to release the results of the surveys, there is some preliminary information that has become available. The picture, if you like moose, isn’t pretty.

It seems 25 surveys were flown across the province, in all three MNR administrative regions. Each survey is an estimate of the moose population in a particular Wildlife Management Unit (WMU). Most of the moose occur in the Northwest and Northeast Regions, while most of Ontario’s human population lives in the Southern Region. Moose surveys in any given WMU are usually flown every 3-7 years, and aerial moose surveys have been done in the province for decades. Surveys used to be done from a fixed-wing aircraft, but these days, most if not all are done using helicopters.

According to sources, ‘most’ of this winter’s surveys in the Northwest Region (14) revealed declining moose populations. All 7 surveys flown in the Northeast Region showed declining populations, while the 4 surveys flown in the Southern Region showed increasing moose populations. However, the WMU’s in Southern Region tend to be considerably smaller than those in the two northern regions, and are not considered to be in the ‘core’ moose range..

Some of the declines were substantial – about 30-80% down from the last survey – and indicated moose are well below population objectives.

What’s causing this decline? No one knows for sure, but there are a number of likely culprits, including high predator numbers, a decline in the quality of moose habitat, disease and parasites (particularly brain or meningeal worm), various aspects of hunting regulations and a myriad of other possibilities.

I’m also working on an article on the status of moose in Ontario, and when that’s eventually published, I’ll either post it, or provide a link to it.

Ontario is not the only jurisdiction where moose numbers are in decline – substantial moose population declines are also occurring in the adjacent state of Minnesota and province of Manitoba. Interestingly, moose populations are booming in Canada’s western prairie regions.

As alarming as the results of these recent surveys are, wildlife population ups and downs are actually rather normal. A stable population – which many wildlife managers strive for – is actually the abnormal situation. In my opinion, it’s likely moose populations will at some point bottom out and will, eventually, start to grow. At least that’s the hope.