With the great blanket of snow, it would seem that those creatures that can stay above without much effort are poised to do best, but some others do well because of their ability to live in the subnivean environment.. An entirely different world exists beneath the snow, a world inhabited by mice and voles and ermine and marten. It’s relatively warm, no wind chill, and full of places to hide. The crunch will come later, when the snow starts to thaw and freeze on a recurring basis. But right now, it’s not a bad place to be.

There is close to a meter of snow on the ground – and more is falling today. This past week,  I had to start shoveling it off the roofs of our outbuildings from the ground using a roof rake, and was floundering around like a beached whale. Obviously, my body design wasn’t made for snow travel.

Lynx, though, do well in deep snow. There has been at least one on our property recently, and I was amazed at how little it was sinking in the white stuff, despite the fact the snow has been very fluffy, with little packing and no crusting.

After an absence of 20 some years, bobcats had started showing up in northwestern Ontario, but I suspect this winter will be hard on them. Unlike lynx, bobcat have small feet, and are more like me than a lynx in the deep snow. Indeed, there will be a lot of deaths in the north woods this year. But the creatures adapted to deep snow and cold have a much better chance of survival than those who favour milder climes, and had been inching their way north with the milder winters of the recent past.

And that, I think, is a good thing.

They're still in hibernation, but once awake, it's likely I'm going to have to deal with a problem bear. Last October, a large bear decided that the chicken pen held good stuff, and was a marauder several nights in a row before cold weather sent him sleeping. We've lived in 'the woods' now for close to 20 years, and although bears are quite numerous here, they are, for the most part, seldom a problem. But once they decide to risk entering the chicken pen, or raiding the garden, there's no stopping them. It's like they're on crack - one hit and they're addicted. They simply cannot be dissuaded - trap and relocate, shooting them with rubber bullets, scaring them with bear bangers; we've tried them all. In the end, there's only one solution - too bad for the bear.

I was sent a column the other day by Benjamin M. Wiegold. His column focused on USA Endangered Species Acts and what he believed to be their dismal failure. In support of his premise, he wrote that there are currently over 9,000 plants and animals listed, considerably higher than the 78 species that were on the list when it came into being in 1978. Of the 78 species originally listed, 72 remain on the list. Two are recovered, 3 are extinct, and 1 removed due to data error.

Wiegold believed the primary problem with the legislation was its failure to recognize that the best way for a species to thrive was if there was economic incentive to use the plants and animals in trouble (often through private ownership). Without values that could be exploited for profit, society, by and large, didn’t seem to be too successful with respect to making sure a species in trouble made a turn around.

I agree that’s a big problem – in Ontario, caribou have been protected from licensed hunting since 1928, but populations have not recovered.

For whatever reason, many who want to see no further loss of species fail to grasp that hunting, or gathering or other activities which make use of the resource, can actually be the best way to ensure recovery of a species. It’s too bad, really, that hunters, with a conservation history that is by and large very successful, are more or less shunned by many environmental groups. Especially given that it was hunters, like President Roosevelt, who are largely credited with the creation of the US and Canadian National Parks systems. Hunters and hunting organizations have brought many species of wildlife (especially game species) back from the brink.

In addition to the economic arguments, another problem I have with endangered species legislation and reporting is that there is a considerable amount of dishonesty with both. For one, many, many ‘species’ listed are actually not a species at all – they may be a unique population, perhaps a sub-species, or a somewhat nebulous biological entity called an ecotype. What this means is that when a ‘species’ is listed, or worse, declared to be extinct, it often isn’t. The species, in fact, could be and often is, thriving.

For example, a lot of caribou in Canada and the US are on ‘the list’ as Threatened or Endangered. But that’s very misleading – all caribou and reindeer are the same species – which means caribou as a species is not at all in danger of extinction. In fact, in Canada, the number of caribou roughly equals the total, combined populations of moose, elk, mule deer and white-tailed deer.

I think listing has become a methodology for some environmentalists to cause undue alarm, but in the end, I think this is doing more harm than good.

At the very least, endangered species acts and regulations need serious re-examination. They sure don’t seem to be working. 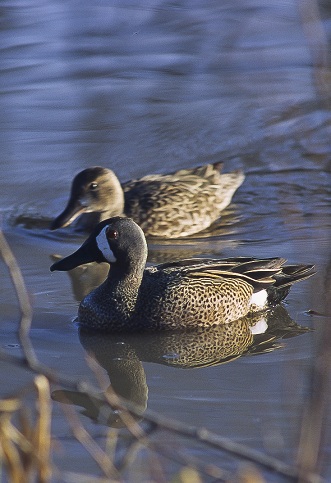 Looking at the frozen pond in front of our house, with the temperature (again) hovering in the -30 C range, made me wistful for spring. Although we sometimes get blue-winged teal visitors to our pond, they have never nested here, preferring larger wetland complexes, at least in this area. They are the 2nd most abundant duck in North America and one of the first duck species to leave their breeding grounds come autumn. Most spend their winters in northern South America. They really don't like the cold, which is why I thought of them this morning.

Wolf re-introduction and management continues to be highly controversial in the western USA, where wolves appear to have reduced big game populations, especially elk, dramatically. I wrote a piece on wolves a couple of years ago, and I think what I wrote then remains relevant today. Check it out at http://www.oodmag.com/hunting/small-game/wolves-small-game-or-vermin/ 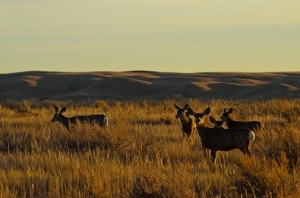 It took over six weeks before I found out that the mature mule deer buck  I harvested in SE Alberta was ‘fit’ for human consumption. SE Alberta has Chronic Wasting Disease (CWD) in its deer herd, and testing of hunter-killed deer for the presence of CWD is mandatory. While mine was OK, one of the 4 deer in total our party took (another adult buck) did have the disease. That was quite a shocker.

CWD is one of a family of diseases that are referred to as transmissible spongiform encephalopathies, also called contagious prion diseases. Other diseases in this family include so-called ‘mad cow’ disease (BSE), scrapie and Creutzfeldt-Jacobs, which occurs in humans. These are all brain degenerating diseases, with no known cure. The suspected causative agent of these diseases are prions, which are abnormal, very poorly understood, cellular proteins.

While I was waiting for the results of testing on my mule deer – a CWD infected deer is not recommended for human consumption, although no cases of transmission of the disease from deer to humans has been recorded – I spoke with Dr. Margo Pybus with Alberta Environment and Sustainable Resource Development. Dr. Pybus is the go-to expert in Alberta on CWD.

We discussed the disease, and I asked Dr. Pybus what she knew about the role of natural predation, and whether predators like wolves might help contain the disease. Dr. Pybus referred me to Dr. Michael Miller, who works at the Colorado Wildlife Research Center.

I contacted Dr. Miller and he provided me with a couple of published research papers that suggested cougars could detect a deer infected with CWD, even in early stages of infection. Although predation rates by cougars on CWD infected deer was found to be as much as four times that on non-infected deer, there did not seem to be any impact with respect to halting the spread of the disease.

All the deer species are believed to be susceptible to CWD (infected mule deer, whitetails, moose and elk have all been recorded – no caribou has been found with CWD, but experts think the disease just hasn’t spread yet to areas where caribou range). Every individual that become infected with CWD dies. In some areas of the USA, up to 40% of the deer are walking around infected with this disease. Where the disease is prevalent, the deer population – to date – always declines.

CWD continues to spread – relatively slowly – but there is no indication that it can be eradicated from an area once established. If detected early, concerted efforts at reducing the local deer population seems to have prevented new loci from being established.

The only other good news about this disease is that humans, as yet, don’t seem to get it. And one would have to assume many hunters have eaten CWD infected animals, given it’s now widespread distribution in western USA and Canada.